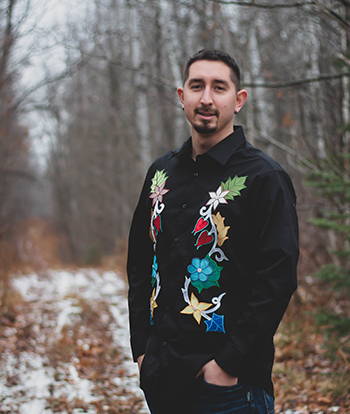 Dylan Bizhikiins Jennings is a member of the marten clan. He graduated from the University of Wisconsin-Madison with degrees in anthropology, archaeology, environmental studies, and American Indian studies. Jennings completed his master’s degree from the Nelson Institute for Environmental Studies at UW-Madison.

Bizhikiins Jennings is a Bad River tribal member and a former tribal council member for the Bad River Band of Lake Superior Ojibwe, where he served two consecutive terms as an elected official. He also served as an appointed representative for the EPA region 5 Tribal Operations Committee (RTOC).

Jennings served two consecutive terms as an elected tribal council member for the Bad River Tribe. He served as the director of public information for the Great Lakes Indian Fish & Wildlife Commission, which required him to be fluent in tribal/environmental news and issues. He was also a writer, photographer, and editor for the Mazina’igan newspaper.

Bizhikiins presents at many public engagements and schools throughout the Midwest on topics including:

He also serves as an appointed member of the Wisconsin Governor’s Task Force on Climate Change. Bizhikiins has been a recent recipient of the National Center for American Indian Enterprise Development “40 under 40” award and a recipient of the UW-Madison Nelson Institute Rising Star Alumni award.